4 Points On The Road For LAGSD Women 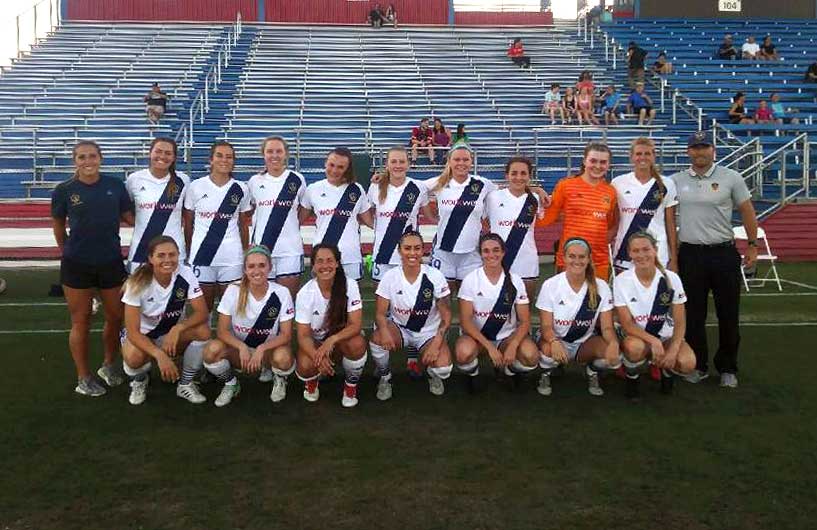 On Tuesday, May 29, 2018, our LAGSD Women’s team travelled to Tucson, AZ, to face off against FC Tucson. With a 7pm kick off, the traveling didn’t look as if it had phased our ladies as they took control of the game, dominating possession and creating several great opportunities on goal. Eventually, the first goal came for LAGSD, with Hannah Keogh scoring from a corner. The second goal followed shortly after with a surging run and finish by Summer Mason to leave LAGSD Women going into half time up 2-0. It was back and forth in the second half with LAGSD creating more great opportunities, but the score stayed at 2-0 and resulted in the first 2018 WPSL league season win for our LAGSD Women’s team.

As gruesome as it sounds, the following day our LAGSD Women’s team travelled to Phoenix, AZ, to play Phoenix Del Sol in the searing Arizona heat. The lack of recovery time proved to be the most challenging aspect for our ladies but with a consistent and constant flow of substitutions they adjusted well and controlled the ball for the better part of the game. Our ladies did find the goal but unfortunately it was called back for offsides.

“Over the two games, I was proud of the effort we showed on both sides of the ball,” said a Head Coach Greg LaPorte. “We showed great quality despite the massive challenges of being on the road mixed in with the heat. It was a very successful trip and coming home with four points is a great feeling.”

LAGSD Women play San Diego Parceiro next on Friday, June 8, 2018, 5pm KO at Army Navy Academy in Carlsbad. Should be a great game.